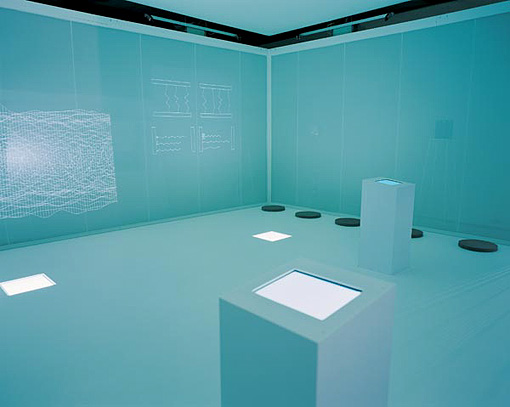 the installation polar is inspired by the science fiction film solaris by andrei tarkovsky (after a novel by stanislav lem). solaris indicates that the human exploration of the cosmos is more concerned with a narcissistic desire to cross the boundaries of our planet in order to fill the universe than with the discovery of new knowledge. we are not in search of alien worlds, but merely looking for reflections of our own idealized planet which we have shaped according to our own notions of science and civilization. only two visitors can access the space at the same time. this isolation is providing the necessary silence to explore the space. only three physical objects are arranged in the fragile white space (ocean), while the other two - scanning devices (poles) - enter the space with the visitors. the poles, two metal objects which contain hidden sensors, seem, at first glance, without purpose. initially, they are perceived as sculptures, but later they become part of a complex system of exchanges for they are the key: as soon as they have transferred their information to the computer system, the two terminals release a hidden touch screen - the visitors' interface to interact with the polar engine. a 3d tracking system scans their movements in ocean (space) enabling them to generate various light and sound events and to modulate the space, continuously changing the atmosphere. sound, light, vibration, visual patterns - all these elements cannot be explored and interpreted in the conventional sense. the experience will pose more questions than provide answers, starting a process of self-reflection.