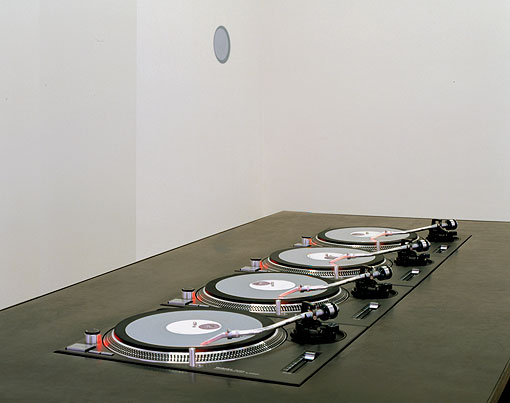 Four Technics SL-1210 turntables are integrated into a table. On each of these turntables rests a specially produced vinyl record with 12 endless grooves each of which provides the visitor with the opportunity to play several sound-loops endlessly. The table functions as the instrument that permits the viewer to layer and superimpose the sound-loops and to create permanently new combinations. The field of interaction is further expanded by the option to substitute the record, to vary its pace and to have it rotate eccentrically through alternating holes. Headphones on top of the table invite the visitor to attentively follow the emergence of the sound surface. When leaving the installation a sound system installed at the exit emits the manually selected combination of sound-loops. Re-confronted with the sound surface, the visitor now recognizes the methods and means of its creation.