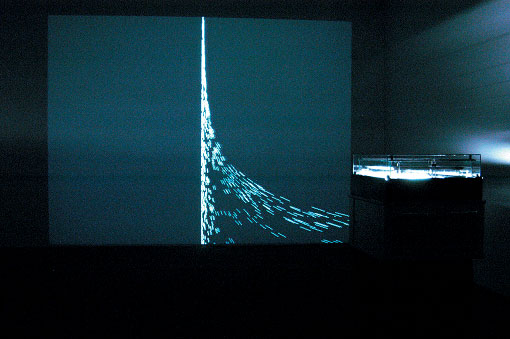 “For quite some time, chaos research has recognized entities called chaotic or odd attractors. What is an attractor? In every system in motion, regardless whether it is a pendulum, a planet or a fluid comprised of many discrete particles, the particles move in a time frame on a surface. In a linear non-chaotic system these surfaces are graphical. […] If a dynamic system follows a specific attractor it is predictable. As soon as the starting conditions are determined it is clear how the system will develop for all times. […] In 1963, Edward N. Lorenz of the Massachusetts Institute of Technology discovered an odd attractor when he analyzed the behavior of fluids. This entity known as the Lorenz attractor is a fractal. The consequence: By tracing the trajectories of a system consisting of many particles on the Lorenz attractor it will soon become clear that initially very dense conditions are beginning to spread out more and more until they form a homogeneous surface. This is precisely the reason why meteorologists are able to predict the weather conditions in a limited area for a short period of time.” - Peter Müller in: Jürgens, Hartmut/Peitgen, Heinz-Otto/Saupe, Dietmar: Chaos und Fraktale, Heidelberg 1989.