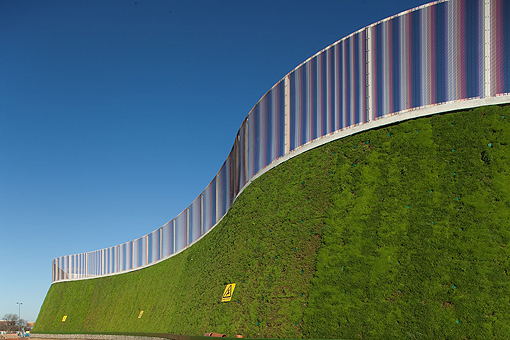 Carsten Nicolai’s lfo spectrum is an alternative representation of the Olympic emblem. The design converts the five rings into their temporal equivalent: an image of the loops of a sound wave as a low-frequency oscillation (LFO). Applied in an unfolding natural colour gradient derived from the spectrum of a sunset, it creates five cycles of intensity across the circumference of the site. As in Nicolai’s other works, the design of lfo spectrum questions our certainties of perception. The visual quality of the panel frieze, with its oscillating colour gradients, together with the shifting play of sunlight, challenges the viewer's sense of the frieze's structure and expanse. Perception is irritated by the work’s constantly altering spatial impression. The design of the frieze, a visual wave loop without a discernible beginning or end, could be considered symbolic of a wide range of associations. These include the cycles of the location and occurrences of the Olympic Games, to its characteristic rhythms of social concentration and dispersal. Through this, lfo spectrum reflects both the intensity and breadth of the Olympic spirit.